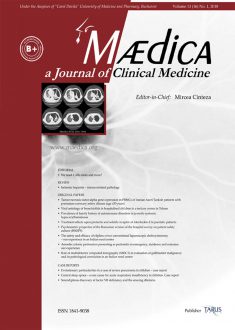 Central sleep apnea is characterized by frequent cessation of breathing during sleep, resulting in repetitive episodes of insufficient ventilation and abnormalities of acid-base balance. It may be primary or secondary, and it is uncommon in children, with limited data for this population.
We present here the case of a five-year-old girl, known to have thoracolumbar myelomeningocele (for which she underwent a surgical procedure in infancy), secondary hydrocephalus (with a ventriculoperitoneal shunt) and flaccid paralysis, who was admitted in our hospital with prolonged fever syndrome, productive cough, severe dyspnea and perioral cyanosis. Following physical examination, laboratory investigations and thoracic radiography, we established the diagnosis of aspiration pneumonia with acute respiratory failure. Medical treatment with multiple systemic antibiotics, antifungal agents, systemic and inhaled bronchodilator, oxygen therapy and respiratory nursing were initiated, with favorable evolution.
During the entire hospitalization, the patient showed nocturnal respiratory rhythm disorders, with sleep apnea crisis of approximately 20 seconds and desaturation, followed by severe hypercapnic respiratory acidosis, manifestations that persisted even after the remission of pulmonary infection, raising the suspicion of an apnea syndrome. After excluding the causes of obstructive apnea, a cerebral CT scan was performed, revealing isolated fourth ventricle compressing the brainstem. The patient underwent neurosurgical intervention and postoperatively, the evolution was favorable, with remission of apnea crisis.
Keywords: central sleep apnea, isolated fourth ventricle, myelomeningocele, hypercapnia, child.