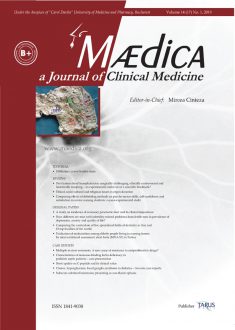 In the history of therapeutics there are some drugs which may be considered as border stones towards two therapeutic directions.
Firstly, they opened a new and important therapeutic field.
Secondly, they began with a clear therapeutic indication and continued their medical life with a new indication, developed after being used for the first one.
In the first category, angiotensin converting enzyme inhibitors, statins, beta blockers or calcium blockers may be included.
In the second one, we may include amiodarone – which started as an anti-angina agent and continued as a strong anti-arrhythmic – or lidocaine, which started as an anaesthesic and continued also as an anti-arrhythmic.
Glliflozins may be considered to belong to such a category of dual powerful therapeutic agents.
They were introduced as a new family of drugs to treat hyperglycaemia in diabetes (1).
Their mechanism of action consisted in producing glycosuria, by inhibiting the sodium-glucose co-transporter 2 (1). And indeed, glycaemia was consistently reduced through this mechanism by this new family of drugs, called sodium-glucose co-transporter 2 inhibitors (SGLT-2).
Several decades ago, young doctors learned that diabetes produced cardiovascular death, facilitating the aggression of the large vessels by cholesterol, followed by atherothrombosis. Lowering glycaemia had a direct benefit only on the small vessel disease of the diabetic patient (ie, retinopathy, neuropathy or small vessel disease of the kidney). Lowering glycaemia was not considered to act directly on cardiovascular mortality and morbidity and, to obtain this in diabetics, the target was to lower bad cholesterol as much as possible and to act on other totally different risk factors such as hypertension or smoking.
However, the first large studies with gliflozins showed a consistent reduction of cardiovascular death in treated patients (1), which changed the paradigm of the main target of therapy to protect diabetic patients from cardiovascular events associated with LDL-cholesterol (LDL-C) and triglycerides at both lipid level and glycaemia. This was not entirely new. Some other new antidiabetic drugs, such as liraglutide from the glucagon like peptide-1 receptor agonists (GLP-1-R), showed a low positive effect on the major cardiovascular events in diabetics (2), but other members of that drug family, such as the popular exenatide, did not show such an effect (2). It was not a class property.
And now, surprise comes. The members of the SGLT-2 family that were studied in large clinical trials (empagliflozin, dapagliflozin, canagliflozin) showed a clear beneficial effect in heart failure and kidney protection as if there were a class effect (2-4). Both actions, but especially the protective activity on the failing heart, contributed to the final effect of decreasing cardiovascular mortality in treated diabetic patients.
It is probably the first time that a family of drugs acting on glucose reduces cardiovascular mortality in diabetics.
Now, the second surprise comes. It was demonstrated that this action of gliflozins, to enhance the systolic function of a failing heart, was present not only in diabetics, but also in a general population with systolic heart failure without diabetes.
New clinical studies began, this time on patients with systolic heart failure but without diabetes, trying to demonstrate that gliflozins may act as positive inotrope drugs in non-diabetics with heart failure (5-7).
In summary, gliflozins were a new strong family of anti-diabetics developed to lower glucose level. From the beginning, they were demonstrated to reduce cardiovascular mortality and some major end points in diabetics, especially heart failure.
Later on, it was proven that improving heart failure occurs not only in diabetic patients but also in a general population with heart failure. New clinical studies are ongoing in this direction. Rumours exist that gliflozins are discussed to be introduced in the future guidelines for heart failure treatment.
We may say that gliflozins are really a new border stone in therapeutics, which succeeded in reducing cardiovascular mortality in diabetic patients by acting mainly at the level of glucose. And then, they demonstrated to improve outcome in another important pathology: heart failure. They already are included in Diabetes Guidelines. We are now in a position to hope that they will be introduced in Heart Failure Guidelines as well.