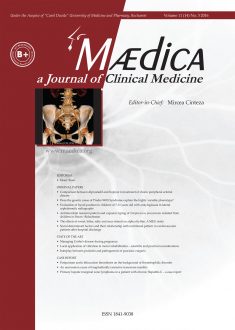 
Interplay Between Prolactin and Pathogenesis of Psoriasis Vulgaris

Introduction: The polypeptide hormone prolactin (PRL) represents the pituitary modulator of lactation and reproduction. Currently, we discuss the wide range of PRL actions “beyond the mammary horizon”. Multiple studies had showed the role of PRL as a cytokine, with comparable structural motifs, similar receptor structures and signal transduction pathways. Almost two decades ago it was first hypothesized that PRL acts as a neuroendocrine modulator of both skin epithelial growth and the skin immune system. Moreover, it was described the PRL circuit between the skin and the central nervoussystem. Psoriasis vulgaris, an immunologically mediated skin disease, is a common disorder, having as main pathogenetic mechanisms the chronic inflammation and keratinocytes hyperproliferation. Psoriasis vulgaris is not a life threatening disease, but affects seriously the quality of life; there is still no causative treatment.
Methods: After we describe the essentials of general PRL biology, the almost ubiquitous distribution of its receptors and the vast list of extrapituitary PRL-expressing tissues, our aim is to summarize clinical observations that provide insights into how PRL may impact on the psoriatic skin and define research for better characterize the complex role of PRL in human skin biology and pathology.
Results: Focusing on psoriasis, as a stress-related disease, we then discuss the possible role of PRL/
PRLR in its pathology and may identify one potential biological marker and therapeutic targets for the
management of this autoimmune skin disorder.
Conclusion: This theory/concept can now be integrated into current views on the multilevel neuroendocrine-immune communication along the brain-skin axis in health and disease. Due to the pathogenic complexity, there is no curative treatment for psoriasis and pharmacological modulation of PRL may represent a future target to restrict the lesions in psoriatic patients.
Keywords: Prolactin, signaling pathway, cytokine, psoriasis vulgaris