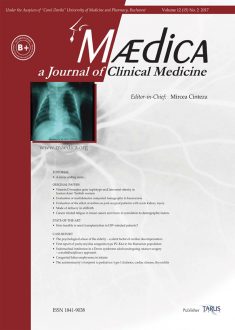 
Mode of Delivery in Stillbirth

Objective: In Romania, a national statistics report on the mode of delivery in pregnancies that ends in stillbirths has never been conducted. Thus, we decided to analyze the incidence of cesarean section versus vaginal delivery rate over a 10-year period in Filantropia Clinical Hospital of Bucharest.
Materials and Methods: We conducted a retrospective analysis over a period of 10 years from January 2005 to December 2015. Maternal age, parity, social status, place of origin, educational level, gestational age, fetal presentation and fetal sex were studied in order to see if there were a scientific correlation with death in utero.
Results: Between 2005 and 2015, Filantropia Clinical Hospital had a total of 31676 births after the 28th week of gestation. During this time period, 174 (0.55%) stillbirths were registered. The overall number of cesarean sections in live-births was 13199 (41.7%) and the rate of cesarean sections calculated for the stillbirth was 17.24% (30/174).
Conclusion: Our study revealed that the rate of cesarean sections in stillbirth had a dramatic decrease based on the adoption of guidelines reflecting evidence based medicine. The vast majority of pregnancies included in our study did not undergo standard perinatal tests and screenings that ensure a healthy and safe delivery, as it is a known fact that many causes of perinatal deaths can be prevented by health care access and perinatal regular visits. We suggest that a proper follow up in the last trimester and easy access to health care facilities can lower the incidence of stillbirths in Romania.