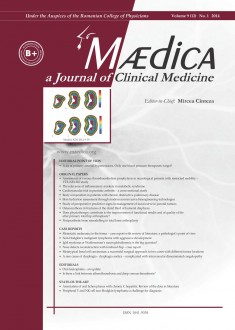 A Lot of Primary Arterial Hypertensions. Only One Blood Pressure Therapeutic Target?

The volume of the medical literature dedicated to HT is huge. The Guidelines for the management of HT are elaborated by each of the most important academic cardiology societies and often renewed. The European Society of Hypertension, joint with the European Society of Cardiology, elaborated the HT Guidelines in 2007, revised in 2009 and published a new edition in 2013 (1). The Joint National Committee (JNC) of the USA had his 7-th edition of the HT Guidelines in 2003 and the 8-th in 2014 (2). In-between there were a lot of Position Papers of the American Society of Hypertension, which also elaborated its own guidelines, published online in 2013 (3). The British, the Canadians, the Australians and many others have their own HT Guidelines.

Any guideline has two main purposes: a correct diagnosis and, most of all, an elaborated protocol of the therapy. Hypertension is a measurable disease. If you have the value of the blood pressure (BP) you may have a correct evaluation of the severity and you can monitor the efficacy of the treatment. So, the recommended target values of the BP after therapy are the milestones of any HT guideline.

The attitude changed drastically after 2010. The almost universal BP therapeutic target became 140/90 mm Hg. The 2013 ESH/ESC Guidelines recommend a target of 140/90 mm Hg in all HT conditions, except the elderly, in whom the target should be higher and in diabetics, in whom only the minimum BP should be a little bit lower (<85 mm Hg) (1). Similar position have both North American Guidelines. They recommend a general BP target is <140/90 mm Hg (2,3). In persons over the age of 60 years the target is higher, of 150/90 mm Hg (2) and in no condition a target of less than 140/90 mm Hg is recommended.

Guidelines and handbooks are concordant in the observation that the total cardiovascular risk is proportional with BP value. The risk doubles for each increment of 20 mm Hg for systolic and 10 mm Hg for diastolic BP. But this proportionality starts from the BP value as low as 115/75 mm Hg (1,2). The concept of the J curve, means an increase of risk at very low values of BP is strongly criticized. If the risk starts at so low BP values, why don’t we use those values as therapeutic targets? The answer given by guidelines is that these low BP values are valid for natural condition. If we try to achieve those levels of BP by therapy, the side effects are so dangerous, that they counterbalance the eventual advantage of very low BP targets. If we look in studies in which the achieved BP target is below 130/80 mm Hg, the proportion of reported accidents due to hypotension is low. It is true that the total benefit in mortality and morbidity was not demonstrated for some of those studies. The reality is that there are not enough studies to demonstrate the thesis that hypotension is not a real danger when therapeutic BP is very low in young and middle aged patients.

Another intriguing aspect is linked to the aspect that there is huge variety of clinical and pathophysiological forms of primary hypertension which are considered too uniform regarding the therapeutic BP target. Let’s have a look to the main mechanism of a primary HT: BP can be increased by the contribution of the peripheral resistance, by the inotropism and by the total intravascular fluid. These factors are further determined by the various contribution of the sympathetic nervous drive, the reninangiotensin-aldosterone system, the contractile status of the myocardium, the peripheral vascular constriction or the renal ability to administrate sodium excess. Any of these factors can have different proportions of their contribution in every patient with primary hypertension without organ involvement. If the main mechanism of a primary HT is so various, should be the therapeutic BP value so uniform as 140/90 mm Hg?

In young people the sympathetic drive is often dominant. In medium aged persons the systolic and diastolic hypertension may have a different significance than an isolated systolic one. In more aged the increased stiffness of the vessels may be present without overt atherosclerosis and the consequent isolated systolic hypertension has a different prognosis than a systolic and diastolic HT. The target therapeutic BP could be very different in every of these conditions without an increased risk of hypotension.

In my opinion, the actual uniform BP therapeutic target of 140/90 mm Hg given by the guidelines is too high. It is an accepted assumption that a natural BP of about 120/70 mm Hg has a very significant lower cardiovascular risk than the natural BP value of 140/90 mm Hg. Primary HT without organ damage includes a large variety of mechanisms and natural associated conditions. It is debatable to say that all these conditions should be treated uniformly regarding the target BP.

In the past lower BP therapeutic targets were recommended only for patients with severe associated conditions, like diabetes or kidney involvement. I think that it is time now to do the contrary: to consider lower BP therapeutic targets for those patients with HT without organ damage, in which accidents of hypotension are not probable. In these very many patients lower BP values could substantially reduce cardiovascular risk on a long term.