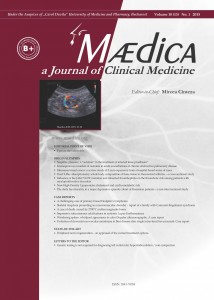 Eyes on the vulnerable

More than one year before I put a question in our journal (1): what is our goal in treating coronary disease: actual ischemia or future devastating ischemia? Actual ischemia is detected by usual tests, which are either not accurate (stress ECG, echocardiography, scintigraphic methods) or not directly linked to the risk of future infarction or coronary death (contrast coronarography). On the contrary, future devastating coronary ischemic events are demonstrated to come from angiographically non-critical stenosis (2). It is logical, because ”positive” remodelling of the vessel makes diseased coronary to enlarge when an atherosclerotic plaque grows. In this way stenosis does not increase, but the disease of the coronary is increasing. In an excellent paper, Aursulesei described in extenso the methods used today to identify the vulnerability of the coronary plaques to future major thrombosis and major coronary events (3).

In the last years the problem of the vulnerable plaque developed more and more. In the PubMed database there is a total of almost 2000 full text papers on this subject, from which 778 in the last five years. In the main congresses of cardiology and atherosclerosis the detection and the therapeutic ways to stabilize vulnerable plaques occupy central position. As far as atherothrombosis is the main killer in most countries and as far as a revolutionary way to cure it is developing, the eyes should be closely kept on this issue.

In fact, the concept of vulnerable plaque is not so young (4). In 1844 the first autopsy aspect of a ruptured atherosclerotic plaque was described and in 1858 Virchow developed the concept of a cyst of fatty material encapsulated in a fibrous cap. After 1987, when Glagov introduced the concept of positive remodeling in the exterior of the coronary lumen, the attention of research fell on the insignificant hemodinamically but dangerous in consequences small atherosclerotic plaques, called vulnerable plaques since 1989 (4). In 2000 Virmani and colleagues described this type of plaques as being thin-cap fibroatheroma (TCFA).

Today the TCFA are examined by multiple techniques applied in the humans in order to demonstrate the features which may give a precise risk evaluation and the consecutive therapeutic approach. There are invasive and noninvasive methods,

The most spread invasive method today is intravascular ultrasound (IVUS). There are several technical varieties: radiofrequency integrated backscatter, wavelet analysis, IVUS guided photoacoustic imaging and even more (5). Tissue penetration is good (about 10 mm), but the resolution is not as good as other techniques. It was the first technique to create a virtual histopathology of the plaque.

Optical coherence tomography is in an asto nishing rapid progress, as far as the technology permitted the use of less than 3 French catheters in any large and medium coronaries. The resolution is the best in the field (less than 15 micrometers), but the tissue penetrance is weaker (less than 2.5 mm). The sensitivity versus histopathology to detect thin cap plaque atheroma is about 80%, but the specificity is 90% (5).

Coronary angioscopy necessitates a 4 or 5 French catheter, which makes it available for large and medium coronaries. A baloon is used to block bood flow for a few seconds and a flush is performed before the angioscopic evaluation of the coronaries. Several clinical studies regarding the role of therapy (statins) to stabilize plaques were conducted by angioscopy (5).

From the noninvasive methods, coronary computed tomography is a robust approach, with an accuracy of more than 90% in respect of the IVUS virtual histopathology in evaluating the vulnerable plaque.

Magnetic resonance imaging (MRI), with the use of paramagnetic particles when necessary is, as in many other fields, the most promising method in coronary atherosclerosis evaluation, because has the potential to offer high quality functional histopathologic imaging.

Positron emission tomography (PET) is still in search of its role, because very many radiotracers are checked in order to be detected after accumulating in the atherosclerotic plaque.

Noninvasive termography developed recently, trying to identify differences in temperature between various vascular atherosclerotic targets. Invasive termography, used in the past, seems to loose its importance.

Hybrid methods are also developed, like the combination of functional histology methods of PET and MRI. Such methods could answer more quickly to the question which parameter has more value in defining the risk of developing acute atherothrombosis.

Multiple clinical trials were accomplished or are in development (3). One of the most interesting is The High-Risk Plaque intiative, which includes the Bio Image Study (6). A more than 7000 subjects are already checked byvarious methods, including, for selected groups, evaluation by contrast enhanced tomography, MRI, PET and multiple biomarkers. The protocol is serious and very ellaborated (6). Now the follow up is in progress, with the goal is to develop a powerfull indicator of major adverse athero thrombotic events after a medium term evolution.

New complex indicators for major atherothrombotic events in asymptomatic population are developing. The technical difficulties and the costs are high. However the moment when we will use them in clinical practice seems to be not so far.