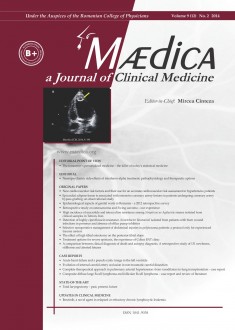 The Effect of High Tibial Osteotomy on the Posterior Tibial Slope

Introduction: High tibial osteotomy remains a useful procedure for delaying total knee arthroplasty for young patients with unicompartimental medial osteoarthritis of the knee. The tibial posterior slope is essential for both ligament function and knee kinematics. Even though many articles were published in the literature, the long term influence of open wedge high tibial osteotomy on the posterior slope of the tibial plateau remains unknown.

Objective: We assessed the relationship among the degree of correction, the surgical technique, the postoperative modification of tibial slope, knee flexion and Knee score at the two years.

Material and methods: We used for evaluation a calibrated x-rays with correction factor. All the measures were done with Cedara I-View 6.3.2 application. All 47 patients were operated in our hospital between 2008-2011, with the same technique, open wedge high tibial osteotomy with an acrylic cement wedge. All patients postponed weight bearing for 6 weeks.

Results: We found that there is no statistical significance (p=0.2) between the preoperative varus and the after surgery tibial slope, but the resulting posterior inclination after surgery influences the tibial posterior slope at 2 years (p<=0.005).The degree of correction has a strong influence over the increase or decrease of tibial posterior slope(p<0.005). An increase in tibial slope increases the knee flexion by 1.45° for every degree of inclination (p<0.05). Functional results are not influenced by small modifications in tibial inclination (p>0.05).

Conclusion: From this findings we may conclude that the most important factors that changes the posterior inclination of the tibia surface are the height of the cement wedge and the surgical technique, by placing the acrylic cement wedge more anteriorly. We have found that the vast majority of our high tibial osteotomies are in fact “flexion” osteotomies. At the 2 years control we have found a slight increase in tibial slope angle (average 1.77°) and knee flexion (average 2.56°) with no functional response. This is a case series study with level of evidence IV.